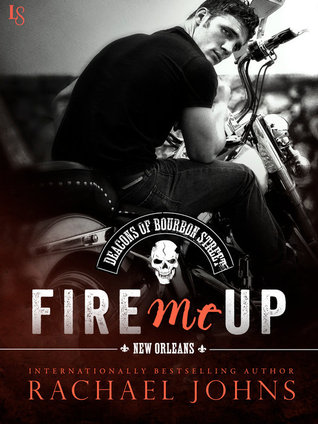 Fire Me Up is the second installment in the Deacons of Bourbon Street series. This series follows four members of the Deacons who have come back to NOLA to pay respects to their leader, Priest Lombard. Each of the members were sent away ten years ago after a mission went south, so they undoubtedly harbor some questions and resentment for their leader whose death seems like less of a tragic accident the longer they stay in NOLA.

Before being exiled from NOLA, Travis “Cash” Sinclair was the resident techie/hacker and bookkeeper of the Deacons. Despite his troubled upbringing and whatever went down with the MC ten years ago, Travis has made a good life for himself as a security analyst in Tallahassee. Although Travis has some bitterness toward Priest sending him away, he’s in NOLA to help his fellow Deacons figure out the circumstances behind Priest’s death. Priest left his properties to the four remaining Deacons; thus, Travis finds himself staying the Deacon’s clubhouse turned art gallery, run by an Australian beauty that is nothing like the women he’s used to.

Billie Taylor is a recent divorcee who fell in love with NOLA when she left Australia and her controlling ex-husband a year ago. Travis is nothing like the men she’s used to but it doesn’t stop her attraction to him. After skirting around the chemistry between them, Billie and Travis embark on a fling while Travis is in town. Once he finds the information he need to explain Priest’s death, he has every intention of getting on his bike, leaving NOLA and Billie in his rearview.

Travis starts out as a bit of a jerk to Billie – baiting her with sexual innuendo and insulting the art in her gallery. I felt like, here we go again, another alpha-hole like Ajax…

FTR, I enjoyed MUB, but Ajax was a little too over-the-top for me normal liking, so I was happy that Travis and Ajax don’t share those qualities. Gradually, it’s clear that Travis’ initial ire is based more on the fact that he doesn’t want to be in NOLA and what the town represents for him than Billie.  Deep down, it’s clear that Travis is not your typical MC hero — thus Fire Me Up isn’t your typical MC romance. Travis is strong and very much the quintessential alpha male but Travis didn’t try to suppress Billie’s free-spirited, feisty nature, nor hide what he was doing from her; which is especially important because of Billie’s past.

I liked both Travis and Billie yet I had a hard time connecting with them completely. Whereas their backstories are fleshed out so we have a good idea what makes both these characters tick, I had a hard time figuring out what it was that made Travis and Billie fall in love so quickly. I needed more interactions in real-time not just being told about what was going on via inner musings. Also, the steam factor is very subdued as much of the sex between Billie and Travis happens off page or fade-to-black. After the in-your-face eroticism between Ajax and Sophie, Fire Me Up fell flat in that department for me.

Overall, a very good addition to the series. The first two installments of this series flow together well despite being written by different authors. The characters we met in book 1 make an appearance here and felt authentic to who we met previously. The suspense plot seamlessly continues and builds upon what we learned in MUB. Although there is a running subplot surrounding Priest’s death, Fire Me Up can easily be read as a standalone novel in this series. I’m looking forward to continuing with Blue’s story to come in December 2015.

One thought on “ARC REVIEW: Fire Me Up (Deacons of Bourbon Street #2) by Rachael Johns”