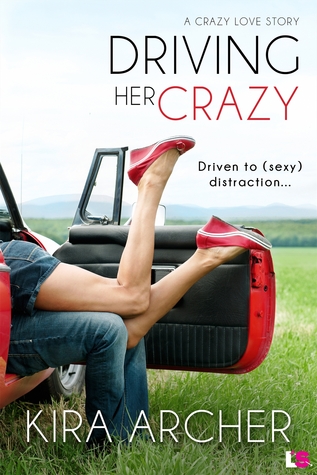 Cherise Debusshere is traveling to her older sister’s wedding from North Carolina to New York City. Contrary to her mother’s advice Cherise decided to fly in the day before the big day rather than a week prior. She will do anything she has to avoid more of her mother’s ire. See, Cherise is the “black sheep” of the Debusshere family. She isn’t a bad girl by any stretch of the imagination, but the one who has gone against the grain of her very successful family when she bombs her chances of getting into medical school. Nathaniel “Oz” Oserkowski is also traveling from NC to NYC for a job interview on the same day as Cherise. Unfortunately, due to bad weather, their flight is grounded.  When Oz gets the last rental car, these two strangers decide to embark on a road trip together to New York.

Driving Her Crazy takes place over the course of about 36 hours. I rooted for Cher and Oz, despite the insta-love nature of their story. We learn a lot about each of the protagonists in the first 50% so I never felt like they didn’t know enough to make things work after only knowing one another such a short time. The author took the rich, city girl meets country, blue collar boy trope and instead of concentrating on their extreme differences, I felt like Cher and Oz actually had a lot in common on a deeper level.  They are both living their lives for their families; rather than doing what they want to be doing with their lives/ careers.

Overall, a fun, solid read. I thoroughly enjoyed the humor and banter between Cher and Oz. I really liked Cherise and Oz too. Oz’s backstory will melt your heart. I so wanted him to realize his dreams of being a writer. Cher was a bit of a pampered puss at first, though not annoyingly so. When Cher finally stood up to her controlling mother, I cheered like my team won the championship game with one minute on the clock. I had some minor questions at the very end regarding how things go with Cher’s family and Oz’s job situation; not enough to take away from the enjoyment of the book though. I would happily read more by Ms. Archer after reading this quick, lighthearted, sexy read. Particularly, I’d love to read a book starring Cherise’s twin brother, Elliot.