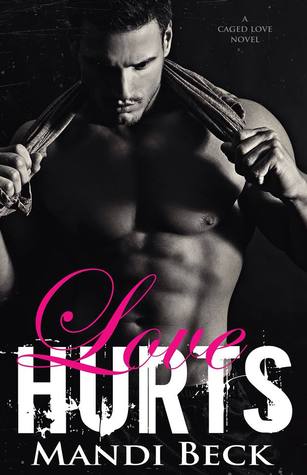 I’d heard so much about this book months before I read it. From the moment I learned that there was a cliffhanger ending I put it on the back burner in favor of reading Love Hurts once I could have its sequel ready and waiting to read right after. I’m not a bandwagon reader, but the teasers and excerpts were very persuasive, so I broke down and read it anyway because my curiosity got the better of me.

I went into Love Hurts expecting to really love it; unfortunately I didn’t enjoy it as much as many of my book besties.

Let’s start with Deacon Love, shall we? Deacon is a hot, sexy, alpha MMA fighter and a dirty-talker to boot. I should have been in romance hero heaven.

Alas, I wasn’t…I found Deacon to be quite annoying and unlikable in many ways. Deep down, Deacon was protective and sweet, but he was emotional and easily angered by the least little thing that didn’t go his way in equal measure. And when he’s angry he does stupid s**t! Deacon has been in love with his best friend, Frankie, for years; instead of telling Frankie, he sits on it until she gets engaged to another man.

“Even then, I knew that I loved you and not just like the pain in the ass little sister that Mav and Sonny treated you like. I loved you, but I wasn’t ready for you. I hadn’t earned the right for you to love me back yet.”

I can rock with an unrequited love trope, but Deacon finally telling Frankie his feelings, felt like it was more because his giant ego was bruised than really being ready to take their relationship out of the friend zone.  Perhaps Frankie didn’t get the memo but she was supposed to wait for Deacon to be ready (while he sowed his oats, no less) to make his move while holding a nickel between her knees.

Another pet peeve for me was that Deacon sprung a hard-on like a teen boy seeing boobs for the first time at every turn.  If Frankie took a deep breath in his presence, it made Deacon hard and ready to go! It became repetitive and juvenile…as if Deacon had nothing else to think about but his d**k.

Now Frankie…I had trouble connecting with her and she came off as really immature. Beyond her being a dancer and the sexiest creature Deacon’s ever laid eyes on, she was very one-dimensional. As Deacon’s friend all these years, she knows he’s on that ‘hit it and quit it’ ish when it comes to women. But she jumps into the deep end with him anyway. Then Frankie’s feelings kept waffling, “I love you…no, I hate you, no, I love you, but I can’t be with you.” Perhaps more about her backstory and/or some backstory on the friendship she and Deacon shared would have helped me get to know her better overall. Lastly, Frankie seemed to be using an ex-boyfriend, who pops up out of nowheresville, as pawn to get a reaction from Deacon. And Deacon being Deacon, it worked each time.

A love triangle was not appreciated when this book already had so much going on with Deacon and Frankie…as a couple and individually.

I wasn’t sure if this was an adult contemporary or a new adult. Though Love Hurts had many of the characteristic problems of the latter, the characters are closer to 30 years old and pretty established in their respective careers, so I wasn’t sure where this book was supposed to fit. Where Love Hurts delivered was in the smexy department. Deacon and Frankie gave good chemistry.

Now lets talk about that cliffhanger.  UGH!!  I knew about it before I started this book, so I can’t complain too much. More times than not, I feel that a cliffhanger is more of a ploy to just sell more books. Dare I say it made sense here. Perhaps I just needed a break from the Dean and Frankie soap opera.

Overall, this book had some issues, but I was engaged enough to want to read the next book, Love Burns and find out how Frankie and Deacon’s story ends.