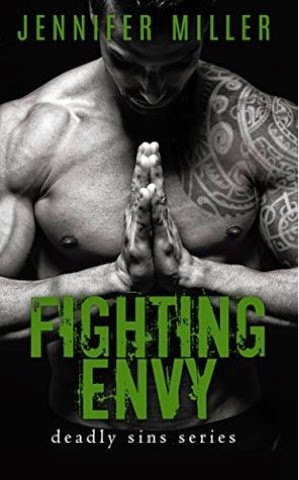 Rowan and her twin brother, Tyson grew up with an emotionally and verbally abusive mother who drilled into them daily that they weren’t worthy of love.

“It’s not my fault your father left us. He didn’t want you two brats. It’s the family curse. I knew it would happen, I knew it.
You’re not worthy of love. You will always be alone.”
As soon as they were of legal age, Rowan and Tyson leave California for Arizona. Five years later, Mommy Dearest’s words are still echoing in Rowan’s head. The fact that Rowan’s good-for-nothing baby-daddy leaves her at the hospital to give birth to their child alone only further proves her mother’s bitter rants.
“It doesn’t matter how many miles separate us, her words are still the poison that runs through my veins. They’ve scarred me; they’ve branded my soul and no matter how hard I try, I can’t escape them. Then, I open my eyes and look at the child sleeping next to me and know that she’s wrong. Now, I just need to believe it.”

Jax, a MMA fighter/gym owner, is leaving the ER after getting stitches when he sees Rowan in the waiting room in labor. Jax stays with Rowan through the delivery and when she’s released from the hospital.

Rowan was a troubled soul but she wasn’t whiny or overly melodramatic. Overall, a strong-willed and likable character. Jax has his own family drama with his father but he’s done his best to overcome it and not let it hold him back.

“I can’t get through to him. And I’ve tried long enough. I thought still having him around was better than never seeing him at all. I was wrong.”

From the beginning Jax is book boyfriend perfection. He’s a alpha-male to the core but Jax has a heart of gold. Even when Rowan sends him away, he still watches over and takes care of her and her daughter from afar.

“Almost three long months of watching, worrying and waiting. Three months of quietly supporting Rowan even though she has no idea.”

Fighting Envy was a sweet and sexy story. Jax’s friends add a healthy dose of levity and humor to the story and I look forward to their books. I still had some questions at the end, particularly how things will come to a head with Jax’s father and his friend Cole, but overall a good, low angst read. Lastly, I wished there was an epilogue but the next installment will be Tyson’s story, so I hope we’ll get some updates on Jax and Rowan there.