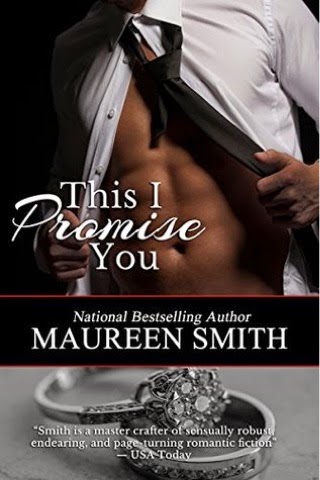 Love love love Maureen Smith’s writing and I’ve devoured anything and everything she’s published. That said This I Promise You wasn’t a fave of mine. Here’s why:

The descriptions of the opulent things everyone owns…from the clothes the characters wear to the homes they lived in…it was heavy handed to say the least. Almost everyone has an exciting, highly paid career; thus, the extravagant lifestyle and things are part of the package. I get it. Most romance novels are about rich people so I don’t usually let it bother me. However, here the descriptions come off as materialistic and shallow for a set of characters that I’ve never really seen that way. I don’t mind some descriptions, but reading those details at every turn of a page had me skimming whole paragraphs…a first for me with a Maureen Smith novel.

Ms. Smith calls this a “bridge novel” which means that in addition to serving as an extended epilogue for Tempt Me At Midnight, there are ample updates on characters we’ve already seen books from and set up for supporting characters’ future books. I’m all for that usually; especially with a series like the Wolf Pack series in which I’ve grown to love the characters so much over the years. Sadly, those moments distracted from the core storyline of Lexi and Quentin and the issues with Quentin’s estranged relatives. Again, I found myself wanting to skim through to get to the meat of the Reddick/Harrington saga. Unfortunately, I felt the plot was pretty thin in regards to Quentin’s family issues.

That’s not to say that I didn’t like This I Promise You. There’s lots of humor and camaraderie between these characters that I always immensely enjoy about Ms. Smith’s series installments. As someone who comes from a very large clan of relatives and close friends, so many of these characters remind me of someone I know and/or an event we’ve had in the past. Also, very few in this genre have the ability to write such erotic love scenes — while still staying in the vanilla lane — like Ms. Smith does. The sexy times between Lexi and Quentin are signature Maureen Smith that I’ve come to expect. Lastly, there are infinite possibilities for new books that I’m looking forward to in the future. I hope Ms. Smith doesn’t keep us waiting too long for those books but I’ve learned to not expect more than 1-2 books a year from Ms. Smith.