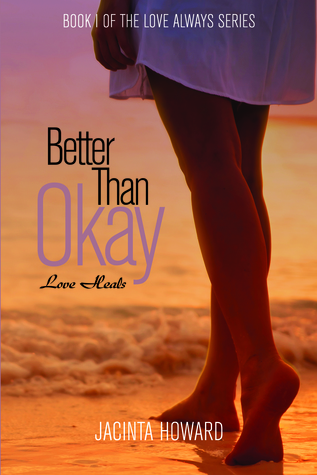 I became an insta-fan of Jacinta Howard after reading Happiness in Jersey last fall. I bought Better Than Okay soon after finishing HIJ but for some unknown reason it got lost in the shuffle of other books. Earlier this year, I saw on the Ms. Howard’s social media that there’d be a sequel coming for Brian and Destiny; thus, I waited until closer to that book’s release to read BTO so I could read the sequel without a long wait.

BTO is a friends to lovers story; one of my favorite tropes. Brian and Destiny have a long history, having been best friends since childhood. Brian realized that his feelings went far beyond friendship a long time ago…

“I didn’t say she changed me,” he said, starting to sound a little annoyed. “Being with her changed my perspective. It helped me figure out what I really wanted.”
“And what was that?” she asked quietly, her pulse increasing as she waited for his answer. She bit her lip as she studied him. “Who,” he corrected, his voice dropping as he met her eyes. “Who I wanted.”
“Then who?

Destiny, on the other hand, thinks that she and Brian are firmly in the friend zone…

Unfortunately, just when Destiny comes around to more with Brian, tragedy strikes and threatens everything.

I’ll take a moment here to give future readers the trigger warning that I felt should have been included in this book. I wouldn’t recommend this book to anyone else without it.

Despite the shock value of what happens to Destiny, Ms. Howard dealt with the aftermath of a violent incident in a realistic and sensitive manner, which I appreciated. Destiny is a multi-faceted, compelling and believable character. Brian is an equally compelling character; book boyfriend GOLD, but I look at BTO as Destiny’s book. Destiny’s past and the issues surrounding what happens are what inform the pace of the relationship here.

Too many times in this genre, a character’s tragedy can be seemingly trivialized for the sake of focusing on the sexy parts of the main couple’s story. I’m thankful that isn’t what BTO is, so that the love story built in a realistic way that didn’t have me eye-rolling.

Overall, BTO is a captivating read with depth and realism; a true romance that’s based on love and healing…

“Love makes you strong. Love covers your weaknesses. Love fills all of the tiny cracks in you that would be imperceptible to anyone else. Love is there even when you think you don’t want it or need it. Love stays. Love endures. Love covers. Love chooses. Love isn’t weak at all. Love is strength.”
Rating: