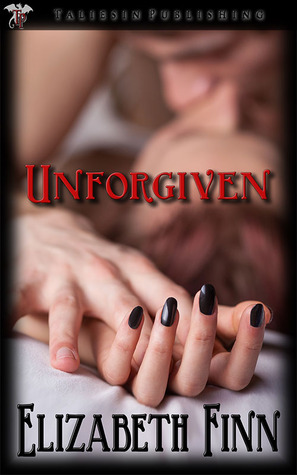 I read Unforgiven when it first released in early October, but it’s taken me some time to gather my thoughts enough to review it properly. I’m still not sure my review will be fully coherent and not a rambling mess, so bear with me. In short, this story wrecked me…I stayed up all night reading, then had to explain my red, puffy eyes as ” fall allergies” the next day.

Let me say that I am a total fangirl for Elizabeth Finn; I really like her stories and characters, but I was so conflicted while I was reading Unforgiven. It wasn’t because I didn’t like the story itself…as with all Elizabeth Finn books I’ve read thus far, I was pulled into the story right off the bat and it just wouldn’t let me go. I spent so much of this book wanting rainbows and sunshine for Bailey and Darren; instead, there was so much hurt between them.

Bailey is returning to her hometown after a long time away and ends up in the ER where we meet Dr. Darren; the last person from Bailey’s past she wanted to run into.

“I hate you. Do you understand me? Your apology means shit to me.”

For a good portion of this book, I hated Darren. He was just so mean to Bailey. Even after we find out what exactly Bailey did that was so bad, I still couldn’t understand his almost perverse need to emotionally punish Bailey. Why not just leave her be; let her move on and do the same?

I wasn’t too sure if Bailey was wrapped too tight either for sticking around and taking Darren’s abuse.

“A man didnt fall in love with the woman responsible for killing his sister. Duh! But if that was so definite, so set in stone…then what the fuck were they doing and why was she allowing it”

Unforgiven moves seamlessly between past and present to help us understand why these two can’t just walk away from each other and move on. Flashbacks and dual POVs are sometimes distracting to a story, but here both made me understand the characters and love this story even more.

Before the tragedy, Darren and Bailey had such a heartwarming and intense friendship; they were right at the brink of something bigger than just childhood friends. Thatsomething was rudely interrupted by tragedy; one bad decision. The moral of this story is that both Darren and Bailey have to forgive themselves before they can have the rainbows and sunshine I wanted for them. The last chapter and epilogue made me smile through my tears because they finally get their HEA.

“He was almost twelve hours away from marrying her, and he was anxious. This wasn’t bad anxiety, though; it was absolute impatience to make her officially his. His vows were written, nothing more than a list of words—his best words for her, their game. She was the other half of his heart, and he knew with her as his partner, he’d be whole.”

My only complaint is that I would have loved more time with Darren and Bailey as a couple after getting over all the strife they conquered instead of being told in the epilogue.

One thought on “REVIEW: Unforgiven (Unforgiven #1) by Elizabeth Finn”