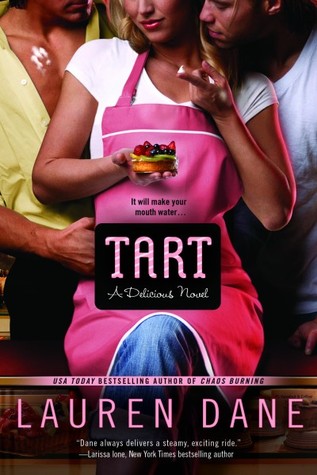 Tart is an moderately enjoyable menage love story but it just didn’t inspire ardor in me like Laid Bare did. Gideon, Cal and Jules weren’t overly memorable as Todd, Ben and Erin were for me unfortunately.  I hate to make comparisons because each book should be evaluated on its own merits; but since Laid Bare and Tart have only a small degree of separation it is difficult to not make any comparisons between the two books.

At the outset Jules is lamenting that she has feelings for Cal but he’s never made a move to take their friendship to the next level, so she moves on — rightly so, and starts a relationship with Gideon. Gideon and Jules are happy together…no one seems to be pining for anyone else. I wish this had been a book about Gideon and Jules and left it at that. Maybe Cal could get his own book with another leading man and/or woman in the future.  Maybe not, like Mary’s (Jules’ BFF) other brother whose name I can’t even remember offhand.  Overall, I would have been fine and dandy with the “you snooze you lose” theme regarding Cal here. Instead, we get Cal coming to his senses and admitting his feelings for Jules when he sees her happy with another man.  Then how two turns into three totally came out of left field for me (even though I knew from the blurb it was inevitable).

Lastly, I would like an update on Gideon, Cal and Jules in future books as the story felt open- ended to me.